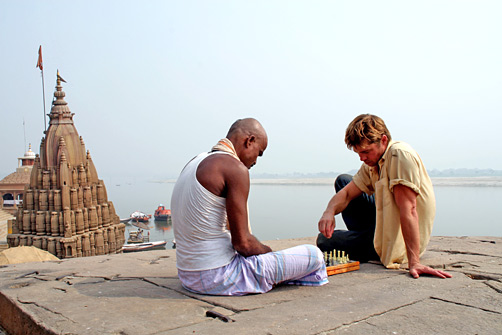 The lines can blur when categorising literature into fiction or non-fiction. There are many books in the ‘non-fiction’ section that are questionable in terms of truth and validity. I am currently reading about the Teachings of Abraham in a book by Esther and Jerry Hicks. The practical advice for living offered in the book was apparently communicated to Esther by entities not residing in this physical world.

This week I saw the movie “The curious case of Benjamin Button” starring Brad Pitt as Benjamin. It is so satisfying to go to the cinema and be treated to a fulfilling movie experience, and this movie provided that. It was so uplifting despite the topic primarily being about death. It is an improbable tale about a man who is born old and lives his life backwards, and yet it is convincingly portrayed and beautifully crafted. The make-up artists certainly had a challenge making this movie, and did it so well.

Brad Pitt was brilliant as the quirky and challenged character of Benjamin. He was also typically gorgeous during the prime years of Benjamin’s life. I swooned as Benjamin (Brad) took off on his motorbike and again when he set sail in his yacht!

This story of fiction, apparently originally an unpublished story by F. Scott Fitzgerald and made into this film by David Fincher, is an improbable work of fiction, and yet again the philosophical advice for living is clear.

Life can sometimes be stranger than fiction. Public libraries are havens for everyone everywhere and so you will see a broad cross-section of society there on any given day, seeking a diverse range of information. There are even ‘wizards’ who visit. This is a fact, although perhaps by name only and not nature – not proven anyway.

Holidaymakers being fined $113 for parking their cars in a loading zone, outside the library when the car parks are choking; now that’s a fact.