As I sat at the beach on the first day of 2015 I felt real peace. As soon as I became aware of this unique feeling I tried to identify why. I had just been for a swim in the ocean followed by a walk with Archie the dog, and I was waiting for my husband to return from his run. The sea was calm but the sky was overcast and grey. No jet skis or boats were out yet. A slight breeze blew the sand dune grasses making the little cottontail grass heads flick back and forth happily. Archie sat quietly near me watching other people and their dogs. I felt happy but tired from dancing the night before until after midnight greeting the New Year at a local venue with some friends. 2014 had been a difficult year and many of the difficult hurdles were now behind me; completed with mixed results.

Last year I was inspired by the ladies on the Up For A Chat podcast to do some forward planning after listening to their episode #40 Manifesting Matisse. I followed their idea to write out a “wish-list” of 32 items on a single piece of paper that is divided into 32 squares (by folding the sheet of paper).

Here are my 32 items with the results at the end of the year – with only four actions that I did not start:

Here is what didn’t go well:

Here is what went well:

So I have once again taken a sheet of paper and folded it into 32 squares, then listed my 32 things, and pasted it into the back of my journal. So come what may 2015…

It is so nice to have a holiday at home. I have made a regular habit of taking leave before Christmas each year, as I find the lead up each year to be unbearable. A break from work helps me to get through the commercial madness with some sanity. I can avoid the nasty potted Christmas music in the stores, as well as the jovial premature well wishes by those that actually revel in the “spirit” and not feel like a Grinch.

So I have caught up with family, had a facial and massage, made some lovely meals, played my neglected piano, worked on that oil painting that has been waiting and gathering dust, gone for bike rides and walks, shopped, had meals and coffee in local cafes and restaurants, watched movies, gardened, cleaned the windows, practiced meditation and yoga.

Oh and what do librarians do when they are on holiday from work? They read of course. So I am currently reading Living As A River: Finding Fearlessness In The Face Of Change by Bodhipaksa. I am also catching up on reading blogs and twitter posts.

I will finish my leave with a weekend meditation retreat with the group I attend. And return to work with a clear mind ready to tackle the Dukkha.

As I walked along the beach near my home enjoying my daily exercise on a beautiful morning, a big black dog walked straight at me staring me down. I’m not a dog-lover by nature and instinctively raised my arms to my chest to avoid being licked or sniffed by this dog I didn’t know. The owner of the dog declared as she followed her leash-free dog from some distance, “This is a Dog Beach!” Really! I thought this was still a public beach open to everyone including the dog-less folk.

“My beach” has truly gone to the dogs. Not only is it the nearest beach to my home, but in the long uninterrupted stretch of sand and perfect water from Mount Martha to Rye, I believe it is The Best Beach for sitting, contemplating, paddling, swimming, wandering and picnicking. Well it was until recently when some public servants in their “wisdom” declared this popular spot to be a leash-free zone for dogs. So inevitably it has been inundated.

Last summer we had quite a few very hot days in a row with temperatures in the mid 40’s (Celsius). Thousands of people flocked to the beaches looking for relief. And they brought along their poor panting dogs totally ignoring any signs stating times when dogs are actually allowed on the beaches in the long daylight-saving days and evenings. I felt sorry for the dogs in their furry coats but it was absolute pandemonium at the “dog beach”. Dogs were everywhere darting happily amongst the people. They swam, dug holes, chased seagulls, chased each other, chased balls and children, then cheerfully peed and pooed oblivious of the people relaxing on nearby towels. The dogs had a ball!

I feel I have been effectively ostracised from “my own beach”. Who made this decision? Obviously dog lovers! I have heard no public complaints aired about this. Am I in the minority yet again? The silent majority have successfully bullied their actions into being once again with no thought or consensus. I am not against dogs or leash-free zones, but why they gave this perfect spot to the dogs is beyond my comprehension.

I wonder if this is how the koalas feel. Or the aboriginal people of the past? Or the smokers of today? (I am not a smoker, or an aboriginie, or a koala!). I feel powerless and without voice in this matter. I am being pushed out and will have to find an alternative beach elsewhere.

There are no officers employed to police and enforce the dog visiting times. And so the times are ignored by many dog owners. As a leash-free zone for dogs at given times, it is now totally a Dog Beach: The Best Dog Beach for Dogs in the Southern Hemisphere. What spoilt happy mutts.

If this is all I have to complain about in my life then things are pretty great.

I enjoyed a perfect Saturday on my day off. It began early on a cold winter’s morning as the sun came up. Donning cycling gear, then extra layers for warmth, we set out into the chilly morning. A group of us cycled our regular route past paddocks blanketed with fog. We shared a BBQ breakfast to celebrate a friend’s 60th birthday.  By this time the sun was up but providing no warmth as we shivered and chatted grasping our warm drinks.

Later my husband bought some fishing gear at a local shop. We climbed aboard some big cruising motor boats in the display room dreaming of escape. Then we went for a coffee and a stroll along Mornington pier. People were enjoying the cold sunny day, fishing, learning scuba diving, walking their dogs, and looking at some dolphins swim by through the flat silvery waters of the bay. 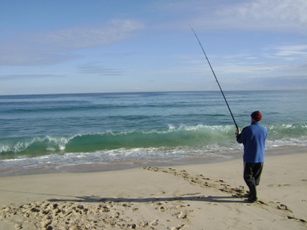 After lunch we went to a surf beach further down the Peninsula. While my husband fished for salmon, I took photos, wrote, read, and still tried in vain to soak some warmth from the cold sun. Only a few other people braved the beach and the sea was too calm for surfers. The quiet was intermittently punctuated by the roar of the waves as they broke directly onto the sand.

I walked to the rocky headland following some tiny plovers as they trotted along the wet sand looking for food morsels as the waves retreated. I thought about being unconnected from the internet. I thought about the freedom and liberty I take for granted as my birthright. My awareness of world events brought to my consciousness by the electronic media. It is depressing to hear about recent events in Iran and the sudden death of Michael Jackson, melting ice caps, the financial recession, swine flu, and more world events. Twitter effectively plugs us into the conversation, but how much can we bear?

My Saturday was peaceful, glorious, in the world, active, and so much more. Who needs drugs to get high when life is so good? And I wonder why anyone would voluntarily enslave themselves to ridiculous doctrines decreed by others. I guess that’s what the people of Iran are fighting for. I pondered these things as the fog crept slowly towards the land from the sea.

As the sun sank towards the west I noticed some sprays of water in the distance. I thought it was probably birds diving for fish. But as I continued to watch I realised it was a group of whales spouting water as they surfaced. They swam in our direction and passed by about one kilometre from the beach. Their huge dark bodies cresting out of the water and occasionally a large fin or a tale could be seen momentarily. If I had been at home with my eyes glued to a screen I would have missed this rare and awesome sight.

Later at home we cooked a curry for dinner – no fish. We watched Before the Game and then a game of AFL football on TV. This was an enjoyable and perfect way to spend a Saturday in winter away from work, computers, traffic, and worry.